PHOENIX – Phoenix Suns assistant coach Dan Majerle presented the 2010-11 Majerle Hustle Award to Suns forward Grant Hill tonight (April 13) during a pregame presentation prior to the Suns-Spurs game at US Airways Center. Hill becomes the first two-time recipient of the award, having also received the honor in 2008.

The award is presented at the end of each season to the Suns player who most personified the qualities of Suns Ring of Honor member Dan Majerle. “As a player and now a coach, Dan Majerle exemplifies the work ethic that is required to be a leader, on and off, the basketball court,” said Phoenix Suns President of Basketball Operations, Lon Babby. “It is that same commitment that is at the heart of this award.”

The winner of the 2011 Majerle Hustle Award was selected based on the results of five voting categories: Suns fans, Suns players, Suns coaches, Suns employees and by Majerle himself. Each voting group carried equal weight in the final selection.

In addition to the award, a $9,000 donation will be made to the charity of Hill’s choice.

Past Majerle Hustle Award winners include: 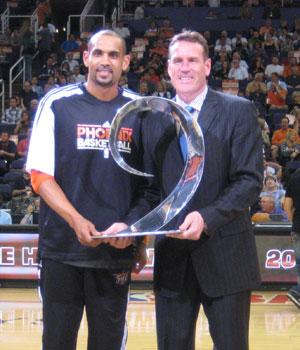