One day after winding down his 16th NBA season (not to mention accepting his second-career Dan Majerle Hustle Award) in Wednesday’s season-finale win over the Spurs, Grant Hill was a welcome topic of discussion at the respective postseason press conferences of Suns Head Coach Alvin Gentry and Suns President of Basketball Operations Lon Babby.

In his second tenure coaching his starting small forward (Clippers, 1997-2000), Gentry freely admitted he is the worst person to offer up an opinion about Hill, who just came off his highest offensive output (13.2 ppg) since coming to the Valley four years ago. His work at the other end of the court wasn’t half bad, either.

“I’m probably one of the most biased guys in the world when it comes to Grant,” the Suns’ head coach said. “He is a guy I’ve coached the majority of his career. He’s one of those guys who come along once in a lifetime. He’s all about winning. The one thing he has proven is that he still has a lot left in the tank.

Gentry thought that Hill’s work on defense against some of the biggest names in the game did affect his success on the offensive end. Of course, that didn’t completely limit the 38-year-old’s all-around contributions. Finishing the season with 13.2 ppg, 4.2 rpg and 2.5 apg, he was just the seventh player in NBA history to average at least 13 ppg at 38 years of age or older, joining Kareem Abdul-Jabbar, Michael Jordan, Karl Malone, Reggie Miller, Robert Parrish and John Stockton.

Playing in 80 or more games for a third-straight season, it marked just the second time Hill’s accomplished the feat in his career (1995-98). He’s also the first player to do it after age 36 since the days of Jazz legends John Stockton and Karl Malone (1999-2003).

Wednesday also marked his 313th career game with the Suns – a new four-year, career best for the forward who will gladly suit up, come the next Suns tip-off.

“I still feel like I can play,” said Hill after Wednesday’s game. “I can definitely go out and compete and get up and down the court. I’ll stay in shape and enjoy the offseason. We have some good pieces here. Hopefully we can set the tone when the next season starts and hopefully we can improve on what we did this year. Things will work out. Last year, we didn’t expect it. We came in hungry and put together a great work ethic. We just need to learn from this year and not be satisfied with what we did. We need to come out with a bit of a chip on our shoulder, not be complacent and go to work on day one.” 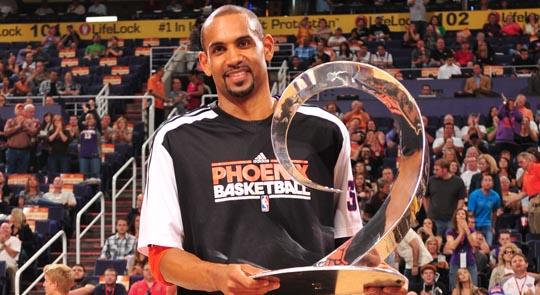