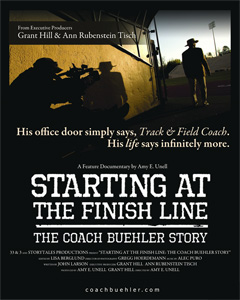 PHOENIX – Starting at the Finish Line: The Coach Buehler Story will have its World Premiere on March 31 as this year’s Opening Night Film selection at the 11th Annual Phoenix Film Festival. Producer and Phoenix Suns player Grant Hill and director Amy Unell will be in attendance to present the film during the Opening Night Premiere event. The evening begins with a cocktail party and the presentation of Festival's annual Visionary Award. This year, the award will be presented to The Arizona Republic and Republic Media for their community service and valued partnership with the Phoenix Film Festival since 2003.

Starting at the Finish Line: The Coach Buehler Story is a documentary about Coach Al Buehler, or "Coach" as everyone calls him. As the Track & Field Coach at Duke University for 55 years, he has coached and inspired such Olympians as Jackie Joyner-Kersee and Carl Lewis, and such Duke icons as Grant Hill, Memphis Grizzlies Shane Battier and Duke Basketball coach Mike Krzyzewski. But his latest challenge may be his greatest - an inoperable brain tumor. Directed by Amy Unell and produced by Hill, this is a personal film of a man who has made a difference in thousands of lives. "It's the kind of film that is perfect to start off the Phoenix Film Festival," says Chris LaMont, President and Founder of the Festival. "A film with heart and soul that engages the audience with an unforgettable true-life story."

The Opening Night Gala begins at 6:00 PM on Thursday, March 31 and will feature live music, a cocktail reception, dinner, and silent auction. Premiere tickets are $125 per person with proceeds benefiting the educational programs of the Phoenix Film Foundation. Starting at the Finish Line: The Coach Buehler Story will show at 7:30 PM in the Cine Capri at Harkins Scottsdale 101.

The 11th Annual Phoenix Film Festival kicks off with the Premiere event and will screen over 100 short and feature films from all over the world before concludes on April 7th. "It's about giving the audiences of Arizona a chance to see that film-making isn't just explosions and big name stars,” says Lamont. "It can also be a creative expression from fresh viewpoints that speak to audiences in a myriad of ways. Also, we have really great parties." The Festival will be held once again at Harkins Scottsdale 101 Theaters located at 7000 E. Mayo Blvd. Phoenix, AZ 85054.