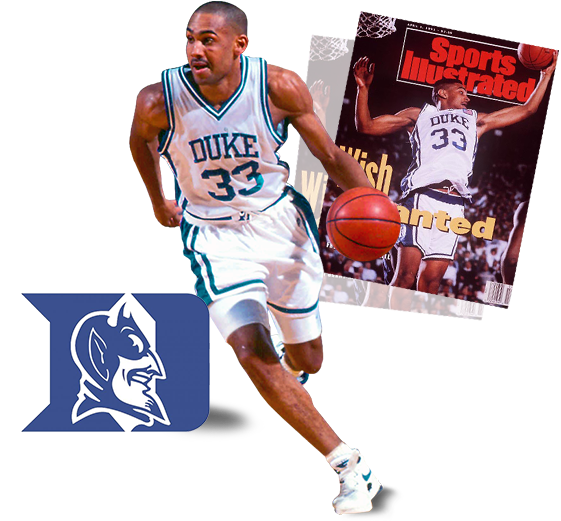 Hill’s statistics at Duke University revealed his remarkable range of talent. In four years, he averaged 14.9 points and 6.0 rebounds per game, while hitting 53 percent of his shots and 70 percent of his free throws. Hill can also score from long distance as he buried 39 three-pointers in his senior year. Upon graduation, Hill stood ninth on the Duke all-time scoring list, sixth in assists and fourth in both blocks and steals.

During his four years of college, Hill helped lead Duke to one of the best four-year records since the John Wooden-led UCLA teams of the mid-1970’s. The Blue Devils won consecutive NCAA titles during Hill’s freshman and sophomore years, and posted a program-best four year mark of 118-23.

As soon as Hill arrived at Duke in 1990, the high school All-American became an integral part of Coach Mike Kryzewski’s team. A starter in 31 games, Hill earned Freshman All-American honors and developed a big game reputation with a solid performance in the NCAA Tournament.

In his sophomore season, Hill established himself as one of the premier players in college basketball with his versatility. During the regular season, Hill moved to point guard for five games to fill in for injured starter Bobby Hurley. Hill averaged 16.4 points and 5.6 assists in those games, which included a victory over a Shaquille O’Neal-led Louisiana State University team.

Hill played his best in pressure situations. In the 1992 ACC title game, Hill came off the bench and shot a perfect eight-for eight from the field and converting four free throws for 20 points. In the regional finals against Kentucky, he scored 11 points with 10 rebounds and seven assists, including the incredible and memorable ¾ court pass to Christian Laettner which set up the winning basket. And, in the national championship game against Michigan’s “ Fab Five”, Hill scored 18 points and added 10 rebounds. Kryzewski credited Hill as being the best player on the court during the game’s last seven minutes.

Throughout his junior year in 1992-93, Hill’s name was touted continuously as a lottery pick. After coming off a summer of scrimmaging against the Dream Team as a member of the Olympic Developmental squad, Hill led the Blue Devils in scoring at 18.0 per game and earned the Henry Iba Corinthian Award as the nation’s top defensive player.

During 1993-94, his senior year, Hill displayed impressive leadership as he took Duke to the national championship game against Arkansas. Hill earned Southeast Regional MVP honors by tallying 69 points, 30 rebounds and 23 assists in four contests. However, the numbers alone cannot show how Hill thwarted Marquette’s hopes of an upset with 16 second-half points or how Hill limited Purdue’s Glenn Robinson, the nation’s leading scorer, to just 13 points in the regional final.