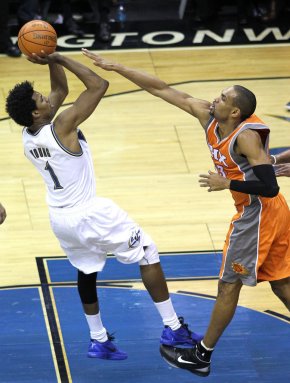 Hill shoots and defends against players who were in diapers while he starred at Duke. 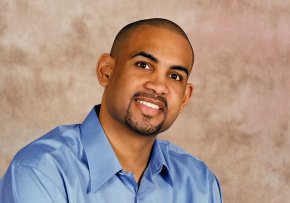 He’s 39, but a strict diet keeps Grant Hill in the starting lineup for the Suns.

At 39, Grant Hill is the second oldest player* in the NBA, but you wouldn't know it by looking at him. Or by watching SportsCenter. As starting forward for the Phoenix Suns this year he and fellow ageless wonder, 38-year-old guard Steve Nash, are representing for the well-over-30 set in a young man's league where players like Jeremy Lin and Kevin Durant dominate the headlines. The Suns are even pushing .500 and have a shot at the playoffs, which would likely be a first for a team with two starters pushing 40.

The key to Hill's continued success is his strict focus on diet and fitness. He's the son of a vegetarian former NFL running back, one of just a handful of players to get their jersey retired at Duke and a 7-time NBA All-Star. He spoke with Food Republic about his diet, his rapport with Nash and his advice for younger players who think they can eat anything they want.

I know your wife’s (Grammy-nominated artist Tamia Hill) single just dropped. She has some pretty serious vocal chops. Any chance we’re going to get a duet?
I can’t sing. She’s the singer. She’s the real deal. I’m just the wannabe singer in the shower.

You've spoken about your consistent diet and fitness regimen. Has this compressed NBA schedule affected your ability to stay in shape?
No, other than just being super disciplined and diligent about what I eat. I’m a big believer that certain foods affect your body, your energy and your ability to recover and perform. With the compressed season, we’ve had a lot of games within a short period of time, [so] it’s even more important to really be consistent about your diet. I’ve always done that. I think in the past during the season once in a while I might afford myself an opportunity to cheat or to have something that’s not good for [me], but during this season I’ve been very diligent about eating the right foods.

Do you ever cheat on your diet?
We used to have a thing on the plane where if we had a road win, we’d get a cookie because they had cookies on the plane. I haven’t really done that his year. At my daughter’s birthday I had a piece of cake and some ice cream.

"As a rule of thumb, if it was here a million years ago, then I tend to eat it." — Grant Hill

Your teammate Steve Nash is also well-known for his diet and staying in excellent shape. What's that dynamic like?
This year in particular I’ve been really on point with my diet and I think Steve has as well. It’s good for me and hopefully it’s good for him having someone around close in age with some of the same belief systems about diet and nutrition. I think we both understand at our age a lot goes into being able to go out there and perform, and diet and nutrition plays an important role. Long after I’m done playing I anticipate continuing to eat healthy and making smart decisions about what I put into my body. It’s not just to squeeze out another year of basketball but hopefully to be healthy for the rest of your life.

Do you ever give any advice to the rookies coming into the NBA?
I think we try to, we see how the rookies come in and we remember when we were a rookie. They see the example of the hard work, lifting and all the stuff you do to get yourself prepared to play. But there’s also the diet. When you’re 21 or 22, certain foods may or may not affect you, so it’s hard to understand why it’s important to eat healthy. I think they see two older guys having the most energy and playing a lot of minutes, so people are naturally interested. Like, what are these guys doing? Why are they able to continue to play and be active and have energy and not break down? I feel like as a veteran and a guy who’s been around I didn’t necessarily have great examples when I came in of veterans who ate healthy. So I kinda envy these guys today that have some older guys who have [this] lifestyle and eat correctly. They might not get it, but at least they have the information, and slowly and gradually over their careers they can change. Just as I have, and Steve has as well.

How did you learn to eat?
My dad was a vegetarian throughout most of his football career, and for the most part had a healthy lifestyle. It wasn’t forced upon me. As a child I probably had typical eating habits and I was extremely active.

You mentioned your father—NFL running back Calvin Hill. Did he ever offer you any advice?
I think my first couple of years as a professional I started to understand and have some discussions with him about diet and nutrition. I also started to remember the things as a child that my father did. I didn’t adopt it at the time but it left an imprint. As I became curious about eating correctly, I remembered seeing that at home with my dad.

Do you ever get a chance to cook as a family?
A little bit—my wife from time to time will cook. We have a healthy chef that will prepare meals. They prepare some healthy things for us, as adults, and for our kids. Things like turkey burgers on a gluten-free bun. And the kids, they don’t know the difference. They can still eat the burgers with maybe sweet potato fries that are air-fried.

Besides basketball, you're well known for having an extensive and serious collection of African-American art. When did you start to become interested in that?
My dad collected African-American art and still does. So as a child and really up until I left for college I was at home and I visited galleries and museums. I never really thought much of it and didn’t quite understand or appreciate it. But when I was in a position to have my own place I gravitated to the things that the art and the artists that filled our home growing up. That’s how I started to get into it. Slowly but surely I started accumulating various pieces of art and the next thing you know it’s like, Wow I have quite collection.